There are legends up in the Niobrara River country about mysterious creatures, unusual people and paranormal occurrences. A farmer named Danny Liska helped to perpetuate some of these stories in his books, including "The Ponca Curse" and "River Rat Town.
"His books were imaginative and locally controversial, but no more so than his own life. The burly son of a hard-working farming and ranching family, Liska tossed hay bales and herded cattle alongside his three brothers.

They appreciated his limitless energy, but Danny drove them nuts. He had a wild streak that didn't fit well with the constant demands of farm life. He kept one eye on the family acreage while the other scanned the horizon and unknown terrain beyond.

When he turned 16 in 1946, Danny bought a motorcycle. According to his sister-in-law, Jean Liska, Danny brought it by the family place so everyone could admire it. Then he took off down the road for a test drive. He didn't return that day or the next, and his parents worried he had landed in a ditch.

On the third day after his disappearance, they started gathering neighbors for a search. Then they got a phone call from their son.He was in Mexico.

In a nutshell, that's the story of Liska's life. He worked his farm diligently while his imagination bubbled with impossible notions. When it bubbled over with some wild idea, he went after it. His brothers were left to pick up the slack back at the ranch.

Liska's most famous adventure started around 1960 with a ride to Alaska. He piloted his BMW motorcycle as far as the Arctic Circle, then spun around and decided to follow the Pan-American Highway all the way to the tip of South America. The road disappeared in places and Liska had to find his own way. He loaded his bike on a canoe for a river crossing and hacked his way through trackless jungle with a guide. He dodged snakes, ate monkey and negotiated with tribes known for cannibalistic tendencies.

In Argentina, Liska heard about a movie in the making. He showed up and when the producers learned he could ride a horse, they shaved his head and used him as a stunt double for Academy-Award winning actor Yul Brynner.

Liska's feats created quite a stir back in the States, partly because he wrote articles and a book about his adventures. BMW gave him a new motorcycle, which prompted another unlikely trek, this time from northern Norway to southern Africa. The company was so impressed it created an ad campaign around his travels.

In 1968, he met a Colombian woman as energetic and unconventional as he was. A politician, spiritual healer and teacher, Regina Betancur served in the Colombian senate and ran for the nation's presidency on a fringe party ticket. She and Liska married in 1973 and had a daughter.

Known as Regina XI, Liska's wife was believed to cure the sick and possess other metaphysical powers. She operated spiritual centers in Colombia where thousands of peasants gathered to see her perform levitations and other wonders. She also taught financial survival seminars for the poor.

Liska and his wife planned to open a metaphysical institute in Niobrara, but it never materialized. He returned annually to check on his farm until he was diagnosed with leukemia in 1992. While Liska's health deteriorated, his wife was kidnapped by a rebel group and kept in hiding for five months.

Danny Liska died in 1995, two months after his wife's release from captivity. His legacy includes nearly a dozen books he wrote and published. "Two Wheels to Adventure," Liska's popular book about his pan-American motorcycle voyage, is now a collector's item, selling on the Internet for more than $200.I'd love to read it, so if you ever come across a more affordable copy, let me know. ,Copyright 2009 Omaha World-Herald. All rights reserved.---------- End of Story ---------- 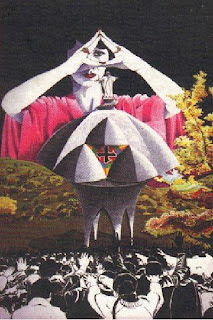